Rafael Simón Morales and González, paradigm of Cuban for his thought and action

Translated from the original in Spanish 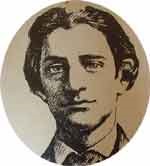 Rafael Simón Morales and González, paradigm of Cuban for his thought and action

In the province of Pinar del Río, Cuba, there are four work and student centers named Rafael Simón Morales y González, among them the main theater of the University of Pinar del Río stands out: «Hermanos Saíz Montes de Oca». Two monuments erected to his memory in San Juan y Martinez, municipality where he was born, and in the Provincial Court of this capital are added to this tribute. But who was this man who deserved so much recognition?

Libertarian desire in the westernmost part of the Island found supporters since the beginning of the conquest by the Spaniards in most of this territory. During the nineteenth century, one of the most outstanding personalities of Pinar del Rio was Rafael Simón Morales y González (Moralitos), a distinguished patriot, who wrote heroic and beautiful pages of dignity, courage, loyalty, altruism and unlimited delivery to the 1868 Revolution.

He was an excellent speaker and polemicist of the most dissimilar sciences such as: Philosophy, Economics, Chemistry, Pedagogy, Psychology, Ethics, History, Physics, among others, to which he imposed a measured analysis that amazed the most raised of the auditoriums. This distinctive style and eloquence motivated him to be nicknamed Pico de Oro.

Moralitos, was born in the municipality of San Juan y Martinez, west of Pinar del Río, on October 28, 1845 in a middle-class family, with possessions of land for tobacco cultivation. Due to the death of his father, he immigrated to Havana with his mother and brothers. There he suffered great economic hardships, in addition to the loss of his agricultural properties in the municipality of birth, despite multiple family efforts.

Since Primary Education it was brilliant, studying and at the same time performing the teaching works with the poorest children. He was literating women, poor and black, even opening night educational centers, starting in 1866, where he was the only teacher. This noble work won him popular support and rejection by the Spanish authorities in Havana, who developed a rampant and ruthless persecution against their actions.

The High School in Santiago de Las Vegas was one of the stages where he developed commendable educational and revolutionary work. However, the Spanish government denied its presence there. On July 25, 1866 he finished his classes by stating: «Gentlemen: Let's not miss the moments; time is urgent; the motherland demands it, and duty knocks at the doors of our consciences.» (Morales, 1904, p. 53)

In 1864 he graduated with a Bachelor of Arts from the University of Havana and in 1868 from a Bachelor in Civil and Canon Law in the high house of capital studies where, later, he enrolled a Bachelor's Degree in this specialty, studies that he could not conclude due to the shortcomings economic family and his patriotic and revolutionary impetus, which took him to the agramontinos battlefields since December 27, 1868.

He received serious jaw injuries that shattered his face, fractured teeth and cut his tongue in a bloody battle in Sevastopol de Najasa, as part of the Agramonte cavalry in Camaguey, on November 26, 1871. The wounds interfered with his speech and underwent several surgical interventions during the war. Céspedes, Agramonte and Estrada Palma, among other patriots, took care of Moralitos' delicate health and instigated him to travel to the United States through Jamaica, to heal and join the Cuban emigration that was very scattered in that country. He agreed, although serious misgivings and worries delayed his departure abroad.

Faced with this dilemma, he wrote to his beloved resident in the northern country: «If we see each other again, it may be too late, because I do not ask for a license and only with feeling would I accept it, for the time necessary to complete the operation and wear a denture, that it would regularize my face more, improve my health and improve my speech ». (Morales, 1904, p. 239)

There was no time or possibilities to travel abroad, the Spaniards seized and burned the rustic boat under construction that he inspected near the coast of Santiago. Weak, disfigured and almost alone, he was surprised by the death of the night of September 15, 1872, at the age of 27, in full revolutionary and political maturity; his only companion was the patriot Manuel Sanguily, his brother Julio, because he was very poor, did not attend the funeral of the dear friend.

The open pit to give him a well-deserved burial was made superficially, which allowed dogs to devour his corpse the night of the burial and scatter his bones like seeds by the redeeming Sierra Maestra, to germinate multiplied in the course of the National History.

As a pedagogue he was brilliant, he had deep intuition to teach and educate by applying novel methods, his classes and explanations were clear, broad, understandable and attractive. He was a declared enemy of empiricism and routine.

He is considered the first Cuban to use objective education, called the Pestalozzi method, with good results. In 1865, through experiment and practice, the young man from Pinar del Rio became a pressing teacher following the path from the easy to the complex, from the simple to the compound, from the relative to the abstract.

His classes in Psychology, History and Ethics were amazing, given his youth, and led to the formation of a personality full of values, just and human virtues. He focused his work on explaining spiritual interiorities, the differences between right and duty, good and evil, virtue and vice, justice and charity. He argued and defended the morals about immorality, the truth above the lie, the independence and sovereignty over despotism and colonialism.

He perfected the philosophical and legal studies that he could not finish for the reasons explained above. He read a lot, he made exhaustive and deep delineations to studied texts, he was an enemy of trivialities and sterile deviants, a lover of substantial and important subjects that motivated the measured and judicious analysis, and he amazed his contemporaries for his power of abstraction and reflection. He distanced himself from the barren, the superficial, the ungrateful.

At the University of Havana, he shone with famous students such as Ignacio Agramonte and Antonio Zambrana, among others, who also thought, dreamed and later fought for the emancipation of Cuba. There he excelled in debates, conferences and gatherings of Philosophy, Political Economy, Chemistry, Natural History (applauded and praised by the wise Cuban Felipe Poey who recommended him to send to France his paper, of this last science, for its analysis and dissemination in Europe).

He conceived in poor neighborhoods of Havana to found night schools to teach and literate artisans, day laborers, blacks and women; among his classmates, he bought school supplies and leased adequate places to educate and prepare the poor in understanding the revolution against slave and colonizing Spain; these classes were free and began on April 10, 1866. They quickly had the opposition of the colonial government claiming that they were threatening the peace and well-being of society and had to suspend them threatened to be imprisoned or deported. He was a precursor of the José Martí Popular University founded years later by Julio Antonio Mella.

He was convinced of the transcendental importance of Popular Education for the Revolution and sentenced:

«And if education has such an influence on the progress of peoples and the advancement of men, will we remain indifferent to so many works we have to do? This Lyceum ... has to create a public library; free classes will be installed from this moment ... We still have enough to do and we will not have fulfilled the duty of good citizens until we put the last chair (carved stone) in the building of our illustration ». (Morales, 1904, p.283)

Very broad was the pedagogical vision of Moralitos for the present and future of the Revolution and the establishment of the Republic with its legislative scaffolding for the popular understanding of free and sovereign Cuba.

He founded schools in the insurgent camps to literate, teach important and necessary subjects such as: Grammar, Anatomy, Pathology, Militia (guerrilla tactics), English, Spanish, Arithmetic, the Constitution and other laws to soldiers and officers of the Liberating Army, foreigners who militated in its ranks and residents of the areas where the contest was taking place. He called these schools Academies, they worked in the center of the island, every day during lunch hours; the preparation was profound and integral. Convinced he was struggling to eliminate social ignorance to consolidate the Revolution and forge the Republic.

He designed a Primer in the Camaguey Mambí on April 10, 1872 to literate, using numbers to identify letters and thus make learning simple and easy. This conception revolutionized education in the country and was resumed by the current Cuban Pedagogy with the method: »I can» headed by the late teacher Leonela González, applied with relevant results in several countries of the underdeveloped world and native communities of the First World as Australia and the United States.

Bearer of Popular Education (mass), Civic Education and the formation of ethical and moral values from an early age, where family and school play a transcendental social role, he used to say:

Within the pedagogical theory he conceived the early ages as an essential link for the formation of a balanced personality, in harmony with society, his ethical and moral precepts, where the play of roles and other recreational activities would contribute decisively in the instruction and education of the childhood.

The young Moralitos, always altruistic, defender of the most elementary moral and ethical values, both in his writings and in the vibrant speeches, left evidence of his opposition to random play, laziness, racism, the discriminatory role assigned to women, to exploitation, to colonialism, to reformism, defended just, democratic, republican and patriotic laws.

Particularly from Pinar del Rio we have a colossal debt with Moralitos that we must pay off with the construction of a prosperous and sustainable socialism. Therefore, we work to disseminate in all possible scenarios his legacy as a paradigm of young patriot, revolutionary and citizen example of altruism, selflessness and surrender of his noble and exemplary life dedicated to this country.